Some may find it weird or some may find it freaky or something drawn from a book, but it is all or real.  I discovered BTS during the most critical time in my life; so critical it felt as though I was thrown into an abyss down to the lowest point of my life.  So bad that it brought me into depression and anxiety.  I grew up loving music (played piano since I was 7) and used that to alleviate any emotional pain I go through, but that time, nothing – not even my favorite 90’s hits or christian melodies took away the pain.  Telling people that I was in despair was an understatement.  I needed a remedy — and fast before I loose myself.  Then a dream occurred.

But before I write about the dream let me put my story in a bit more context.  During the time I was going through difficulties in my life, I only know of BTS.  I see their poster taped on my daughter’s wall, which I don’t really pay attention to.  I hear the boy band’s name mentioned a lot by my cousin who’s an army since they debuted, but again, I never paid attention.  I am one of those people who don’t want to put a little effort to know names and faces, and yes I have to admit I once said, “they all look alike.”  I am one of those people who just turn my ears the other way around and leave the moment I hear “BTS”.  There was no way I would get into another boy band, especially kpop since I retired from boy bands back in the early 2000 (gives away the idea of how old I am … bwahahaha).

Now let me tell you about the dream.  It was so vivid, I wrote it down the following day the dream occurred.  It started out with me checking into a Bed and Breakfast for a few days to get away from the chaos of life.  I wanted some peace and quiet time.  After setting down my luggage in the room, I grabbed a book and headed downstairs to do some reading in one of the huge living rooms (there were two across each other).

I settled down on a comfortable couch and started reading when all of a sudden I heard loud noises right outside the window.  There were people running around screaming and peeking through the windows.  I thought, “what in the world is going on?”  A staff came by so I asked what the chaos is all about.  She said, “someone found out that a famous boy band is staying in our Bed and Breakfast.”  She left and I looked around to see who it was.  Right across the living room from where I was sitting were guys laughing and joking around.  I couldn’t make up any of their faces, except for J-hope (I didn’t know who he was at that time).  Then all of a sudden someone jump from behind the couch and sat next to me.  I looked at him and asked, “and who are you?  What’s your name?”  He answered, “Hi!  I’m Jungkook,” with his right arm stretched out for a handshake.  I shook his hand and said, “nice to meet you.”  After that introduction, I looked across the living room where the rest of the group was still hanging out, laughing and making jokes.  I then saw another glimpse of J-hope before waking up.

I thought it was weird that they appeared in my dream, because I don’t even know who is who.  A few weeks after that dream, I wandered into my daughter’s room and started examining the photos and faces.  I couldn’t  recognize who Jungkook was since they all had different hairstyles and color.  So I asked my daughter who Jungkook is.  She pointed to him, but again, he didn’t look like the guy in my dream.  Then she pointed to another photo: this one specifically … 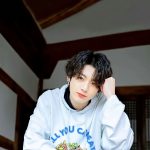 … and that blew me away!  That’s exactly how he looked like in my dream.  That’s the guy who introduced himself!  The rest was  history.  I started learning their names, then watched cracks on YouTube, but what drew me to them is their music.

Music has once again given me the chance to heal, thanks to BTS.  They are my companion when I go on long drives while I clear my mind or cry out my fears and worries.  Their music keeps me company when I journal or when I do chores.  When I started learning their songs and their meaning, it dug down deep in my heart to the point where my worries would be erased and “life goes on.”

Now I am a solid army (although a baby army), whose biases are Jungkook and Taehyung – and the rest of the members are wreckers – but still love them all.  Thanks to their music, the way they make me laugh, the way they let me forget my problems, fears and anxieties, their genuine personalities that we can relate to and their love and care for us armies regardless of how long we’ve been one.  The timing was impeccable … discovering them through a dream could not have come at a perfect time.