Discovering BTS: an unexpected journey
Chapter 1 – Down the Rabbit Hole

I began the fall down the proverbial rabbit hole on a visit to see family in Atlanta, Georgia in October of 2018. Hey Nana, you want to watch some videos of my favorite group? Little did I know how that fateful question would open a door that would affect the rest of my life.

I was familiar with the name, only because my stepdaughter and granddaughter attended a BTS concert at Citifield a few weeks earlier; however, that was the extent of my knowledge. I wondered at the time why they would travel all the way to New York, just to see a boy band. What was their overpowering appeal? I would soon learn the strength of that allure.

At first, there was some hesitation. I was curious of course, but I mostly did it to be kind (“ya, sure hun”), however, I must divulge they were damned cute. So the three of us sat in my stepdaughter’s home office and watched one video, which became two, and then before I knew it, an hour or more had passed. Hey, I stated, I like that song.

Well, two days later, I was asking (shh, begging) to watch yet another. Soon we were behind closed doors once more, staring, drooling, and making flirtatious remarks about these handsome young men. I was beginning to comprehend their indisputable and infectious adoration of BTS. But wait, it wasn’t just their looks (though that certainly didn’t hurt), but they could actually sing and dance. I was impressed with their raw talent and their professionalism—the music was new and refreshing. Then my son-in-law entered the room, and saw the look on my face. “Oh gawd, it’s a contagion”, he sighed aloud, and left shaking his head. Evidently, he was all too familiar with those blank stares
and dreamy expressions. Yes, it was all over and although he knew it, I had no idea what was in store for me. However, I gave in and disclosed I was a tad smitten.

Over the next few days, they challenged me to learn their names. “Oh, don’t worry Nana, you’ll get it.” “Impossible”, I replied, because just when I thought I was able to name one or two, they’d change their hair and/or their eye color. However, Jimin stood out among the rest. He caught my eye as he gyrated across the screen. “What’s his name?” Okay, one down, six to go, and like that, I had a bias. Yes, just one of the terms I would learn over my course of study.

While it was difficult getting to know who was who (as with any other group), I had the most trouble differentiating between Jungkook and V. To me they looked like brothers, especially with their natural brown hair color. Then there was J-Hope. After, Jimin, he was the easiest to pick out of the bunch because of those beautiful, prominent cheekbones, but it only worked when he was smiling. This wasn’t going to be an easy task. Then they threw a monkey wrench at me—these were only their stage names. C’mon, I was just getting the hang of this! I had some homework to do. But before I left their house, they sent me home with a poster, which still hangs in my she shed. Call it premeditated indoctrination. I’m onto you girls. I know what you’re up to. 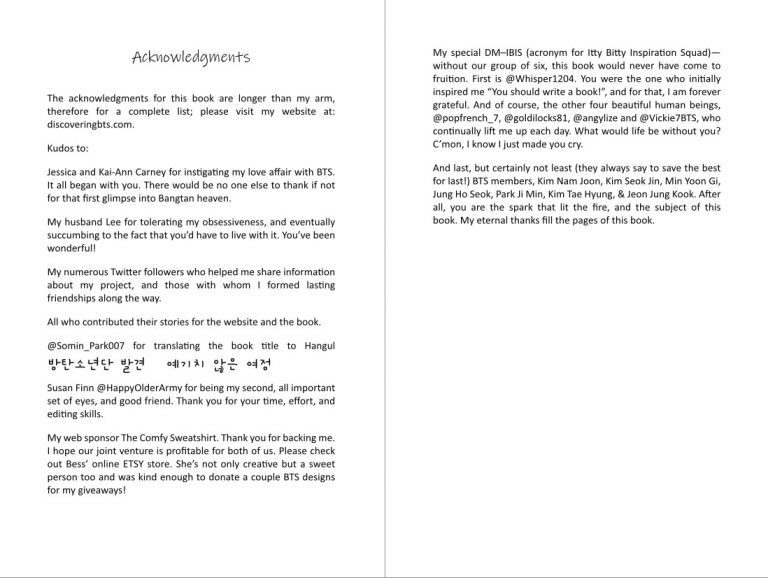 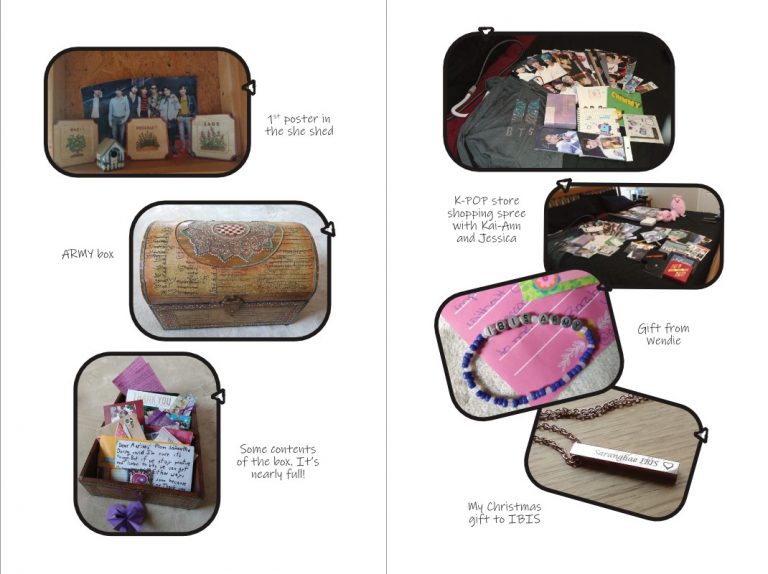 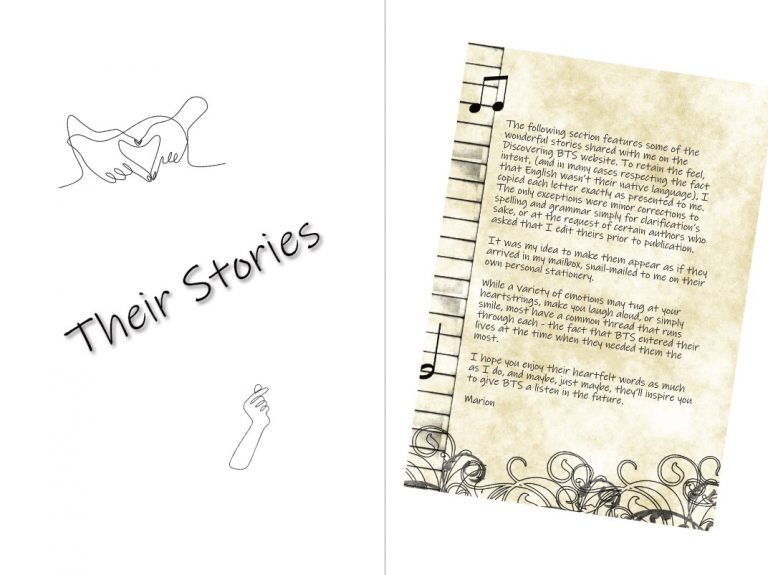 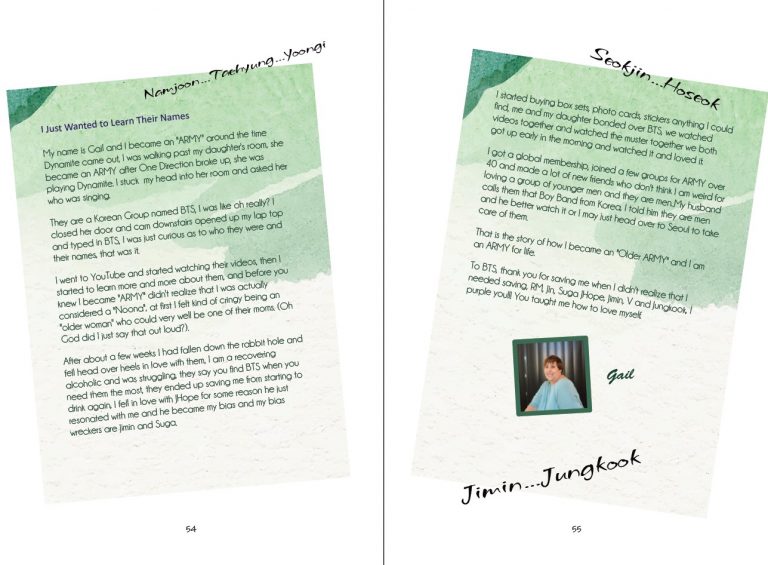 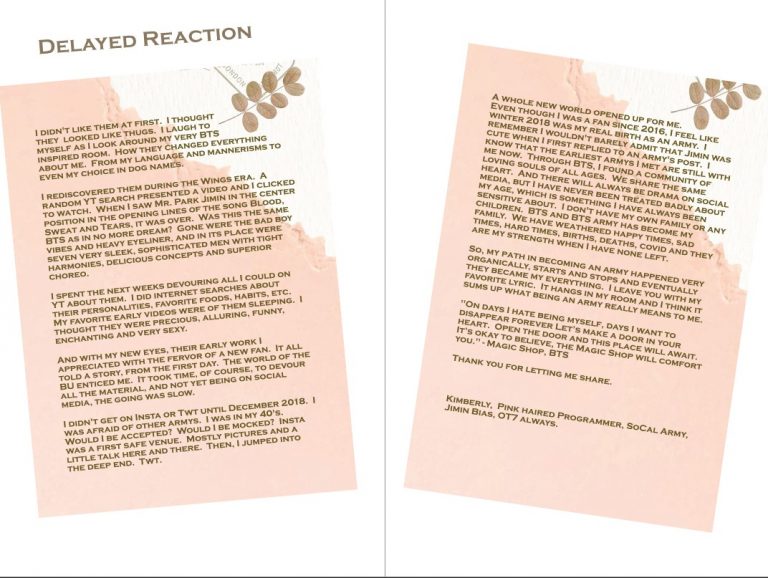 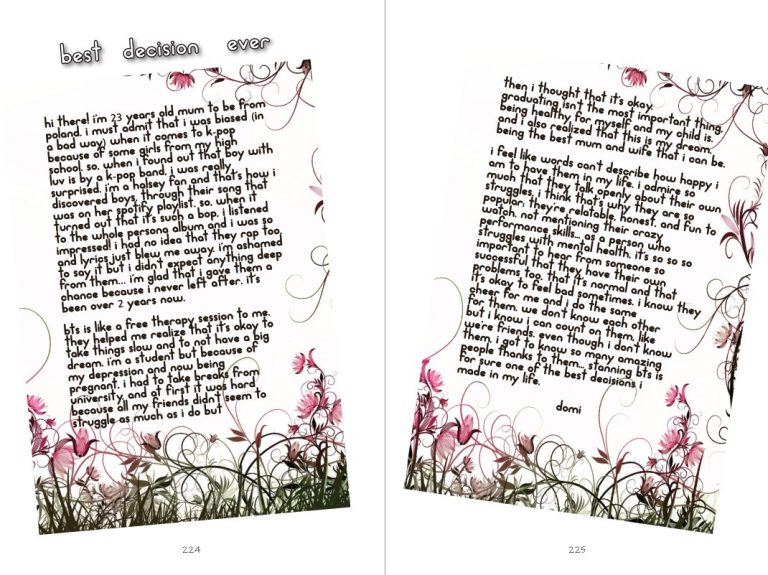 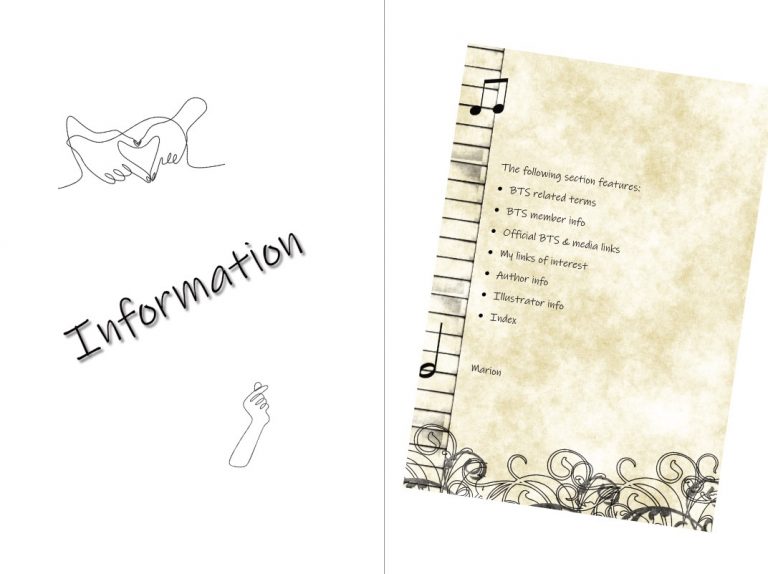